A Pillar of Tech Transfer at Caltech

Just over 20 years ago, Caltech was a rarity among top research institutions: it had innovative ideas pouring out of its labs, but it lacked a dedicated team to help scientists and engineers transfer their big ideas to the marketplace.

Tech transfer was nothing new at the time—MIT and Stanford had run tech transfer offices for decades. But Caltech's humble culture of hard work that eschewed flashy rewards had a way of stifling the entrepreneurial spirit, says Richmond Wolf, director of what was originally called Caltech's Office of Technology Transfer (OTT) from 2004 to 2006. "We were always the premier science institution. But tech transfer was kind of like an afterthought," he says.

That changed with Larry Gilbert, the founding father of technology transfer at Caltech, who passed away in November of 2016 at the age of 84.

In the 1990s, Gilbert was already a star in the world of tech transfer. He started in the field in the early 70s at MIT, home to one of the first in-house tech transfer offices; created Boston University's office of tech transfer in 1976; and co-founded the Association of University Technology Managers, a national organization now with more than 3,200 members at 300 universities, research institutions, and teaching hospitals.

At the time, patents and licensing at Caltech were handled through the Office of the General Counsel. The need for a dedicated and nuanced approach became apparent to David Goodstein, the Frank J. Gilloon Distinguished Teaching and Service Professor and Professor of Physics and Applied Physics, Emeritus, and Thomas Everhart, president emeritus and professor of electrical engineering and applied physics, emeritus. They recruited Gilbert from Boston University to build an office of technology transfer from scratch.

Under Gilbert, the office became the campus hub for receiving and evaluating invention disclosures, working with the U.S. Patent Office, negotiating licenses with outside companies, and developing commercialization strategies for faculty and students interested in launching startups.

The first thing Gilbert did was to start meeting with as many professors as possible, one by one. Rather than give presentations, he sat down for informal chats with the faculty members to learn more about what they were doing.

Mory Gharib, the Hans W. Liepmann Professor of Aeronautics and Bioinspired Engineering and director of the Graduate Aerospace Laboratories, was among those who sat down with Gilbert and vividly remembers the gruff but knowledgeable man and his ever-present baseball cap.

"He had a deep understanding of technology. I was amazed when he showed up in my office and started talking about my own research and seemed to know even more than I did," Gharib says.

After months of faculty meetings, Gilbert launched a tech transfer office based on four core principles, says current director Fred Farina, chief innovation and corporate partnerships officer: create and maintain trusting relationships with faculty and other researchers; utilize a robust patenting strategy; focus on startups; and always understand that tech transfer gives Caltech two bites at the apple—one through equity from successful companies and the other through supporting tomorrow's philanthropic leaders.

By all measures, the effort was a runaway success. Before OTT was formed in 1995, Caltech annually received an average of 36 invention disclosures—informing the Institute of potentially patent-worthy developments—from Caltech scientists and engineers. Last year, that had jumped to 229, with 196 patents issued, nine start-ups launched, and 1,922 total active patents.

"When I came here in 1995, any entrepreneurial activity that was done at all was done out the back door," Gilbert told a Caltech publication in 2001. With OTT's guidance, Caltech initiated a number of new programs—including the Caltech Innovation Initiative, a fund that helps provide resources to early-stage projects with commercial potential and shepherds new ideas across the "Valley of Death" that separates the lab from the marketplace.

"It's amazing that as a small institute we have such output," Gharib says. "Before Larry, some faculty didn't even know that their ideas could have a use."

Colleagues credit the success of tech transfer at Caltech to Gilbert's policy of developing and maintaining trusting relationships with faculty-inventors and minimizing bureaucratic hurdles to transferring technologies to the marketplace. To secure the future of OTT itself, Gilbert made a point of filling his office's staff with scientists and engineers who have a deep technical knowledge who also have an inclination toward business; he also established a line of succession for the smooth transition of leadership in the office.

Three years ago, Caltech's corporate partnerships office was merged into OTT, creating the Office of Technology Transfer and Corporate Partnerships (OTTCP) and expanding its mission to include management of Caltech's collaborations with established businesses.

Since its founding, the office has helped launch over 240 startups, 25 percent of which have had successful exits (meaning that they were acquired by a larger company or had an IPO), and 40 percent of which remain active, viable companies. Add those to the more than 1,000 technology licenses that have been granted, and the office has helped generate $395 million in gross revenue for Caltech.

In 2015, Gilbert retired to Florida, but remained in touch with his colleagues in the office that he built from the ground up.

"Larry was a mentor and a friend to many people in OTT, including his successors, Rich Wolf and me," Farina says. "He taught us everything we know about tech transfer." 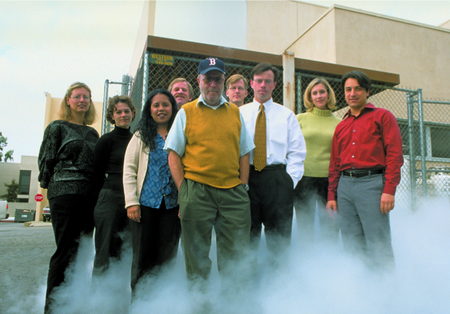 Larry Gilbert (center, with the cap) with members of the Caltech Office of Technology Transfer in 2002. Credit: EAS Communications Office, Caltech
Image Lightbox 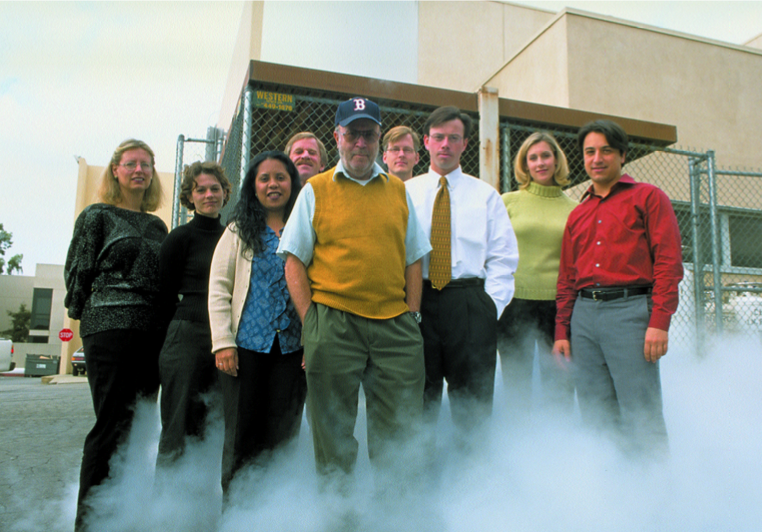